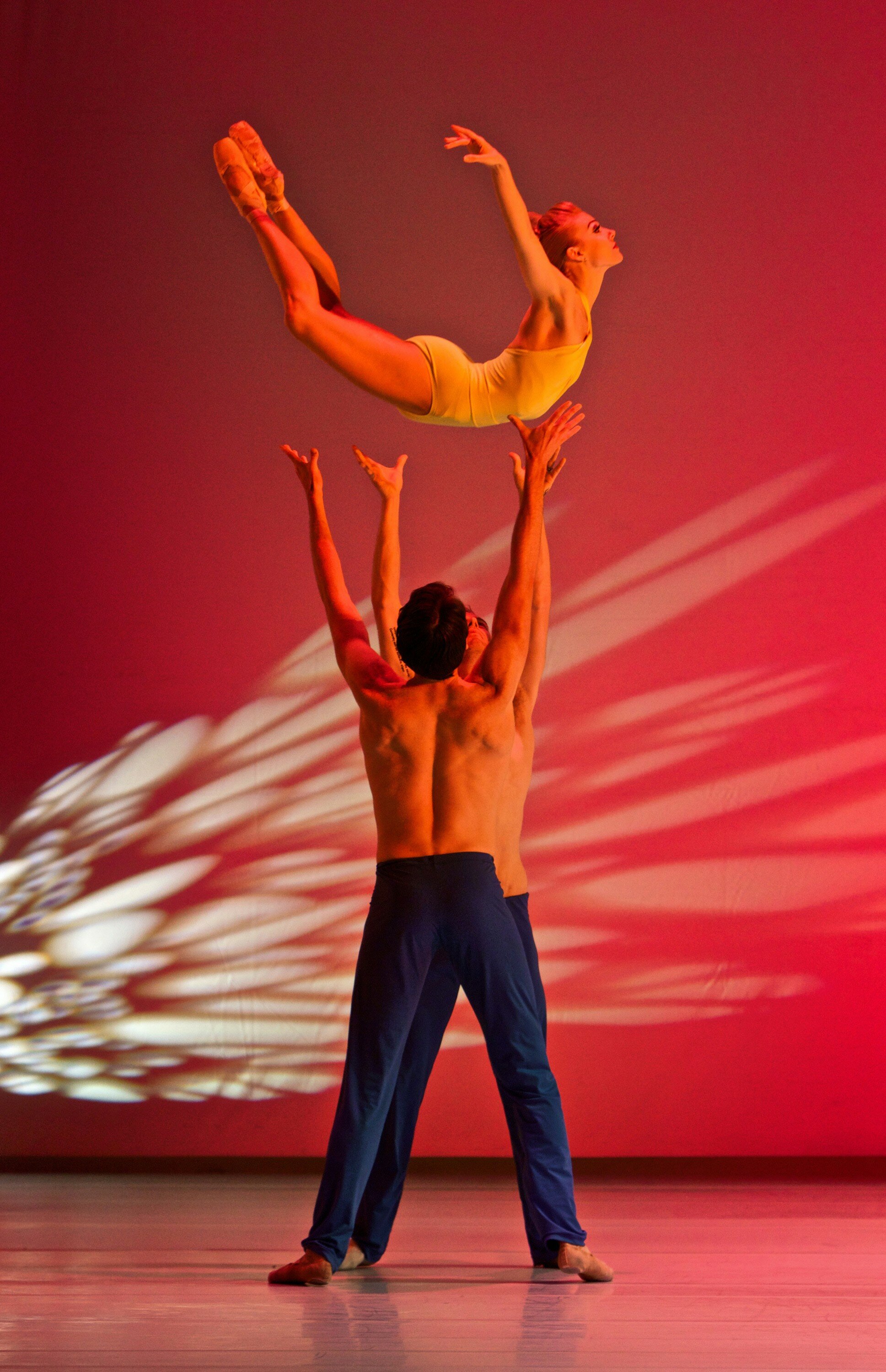 SAN FRANCISCO’S Smuin Ballet returned to Carmel for the final program of its 21st season, attracting large, enthusiastic audiences to Sunset Center. In her 17-minute Petal, first danced by Smuin here in 2013, choreographer Helen Pickett intentionally expects her dancers “corporeally, emotionally and spiritually” to “reach a state of vulnerability,” by which she means a totally honest style of communication. Petal opened on a large yellow box, the four women dancers in pale yellow leotards, the four men in dark pants. Later, the color in the box went to rose, then pink, and back to rose. (Photo by Keith Sutter.)

Driving music was by Philip Glass and Thomas Newman, the latter best-known for his many Hollywood film scores. Pickett’s style here is abstract except for implicit flirtations between pairs dancing in full physical contact and occasionally with the audience, gratuitously breaking the fourth wall. (It tasted of Twyla Tharp’s wit and whimsy.) Dancing was nearly always nonstop but now and then the dancers not central to the focal action were allowed to walk on and off casually. Groupings of dancers were both symmetrical and asymmetrical, from full ensemble to duos and trios. Coming at the end of a long run of Bay Area performances it felt less than fully-charged with Smuin’s usual intensity.

Following the first intermission were two well-known works by Michael Smuin, the company’s late founder. The Balcony Pas de Deux from Romeo and Juliet, with music by Prokofiev, featured Erin Yarbrough and Jonathan Powell with a sustained high lift at its climax. A thing of beauty, it was set before a backdrop of twinkling stars on a clear black night. (The stage surface was now black and would remain so for the remainder of the program.) Smuin’s Hearts Suite, excerpted from his Le Ballet des Coeurs, an homage to the Carné film Children of Paradise and the songs of Edith Piaf, presented Nicole Haskins at Garance, a courtesan in red and black, and Ben Needham-Wood as Baptiste, a mime artist. The three panels could be called Girl Meets Boy, Girl and Boy Dance Together, and Boy Dances Alone, Abandoned and Brokenhearted. The performances were suitably melodramatic, especially the last scene.

Adam Hougland’s Ask Me, in its world premiere production, brought back the full company. This talented young choreographer has made major waves in terpsichoredom. He danced with the Limon and Lar Lubovitch companies and created his first choreograph while a student at Juilliard that won the Hector Zaraspe Prize. His works have been staged by more than a dozen major companies and institutions here, in Canada and Europe. He created his own Rite of Spring for Louisville Ballet and the entire Mozart Requiem and a new Firebird for Cincinnati Ballet.

Ask Me is a dark steamy piece full of punk attitude and street smarts, costumes of glitter and splash, body paint, tattoos and shades. Dozens of lights hanging from the fly flashed and faded in bursts and patterns. The five selected Joan Wasser songs (that she recorded as Joan the Police Woman) provided the heat and energy that Hougland captured into his designs. Most of the ensembles were physically engaged in calisthenic workouts of full body language that kept the arms as busy as everything else. Ensemble rank and file alternated with a pair of duets, one scene each that began with only men and only women, joined halfway through by the other. Instead of ending the 22-minute piece with the full corps, it wound down to a brilliant solo by Weston Krukow.

Beneficially, Hougland uses the devices of classical ballet—material presented at the start reappears literally or in variations later on. Hip-hop makes perfect sense in dance just as Wasser’s nouveau R&B does in music.